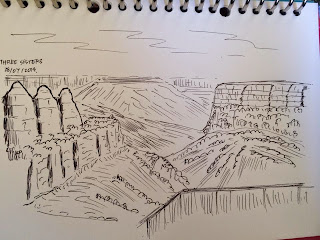 I managed to add some other predictors: anions, cumulative monthly rain, and lagged-1 monthly rain.

The following table shows the updated result.
Based on the table, I made a conceptual model about the water flow and the interaction between predictors in the system. As I've mentioned before, the surficial processes have stronger control to water chemistry than lithology. Hopefully the following sketch can give more spatial sense of the area. The strongest process detected by mgcv is NO3 enrichment in the river water as it gains water from groundwater flow. The other process is dilution  effect by river water as shown by decreasing pattern for elements like Cl, SO4, and Mn towards river.

This post would be the continuation of the previous serial posts on GAM using mgcv package. As I have posted before, I am looking for predictors that explain the interaction between groundwater and river water in Cikapundung watershed (Bandung, West Java, Indonesia).